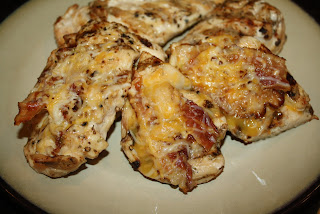 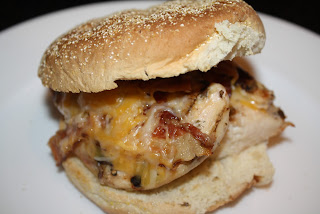 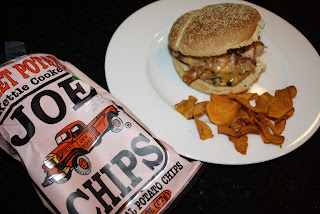 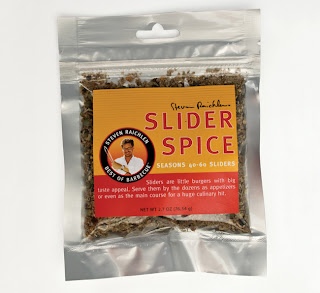 I used to work at Outback Steakhouse and guests would always order the Alice Springs Chicken. “Grilled chicken breast and bacon smothered in mushrooms, melted Monterey Jack and Cheddar cheeses, with honey mustard sauce.” This never appealed to me but marrying a man who loves chicken and bacon, I knew he would enjoy this dish.
Ingredients:
Honey Mustard Marinade:

1. Use an electric mixer to combine the Dijon mustard, honey, 1 1/2 teaspoons oil, and lemon juice in a small bowl. Whip the mixture for about 30 seconds.

2. Pour about two-thirds of the marinade over the chicken breasts and marinate them, covered, in the refrigerator for about 2 hours. Chill the remaining marinade until later.

4. In a small frying pan, sauté the sliced mushrooms in the butter.

5. Brush each seared chicken breast with a little of the reserved honey mustard marinade (not the portion that the chicken soaked in), being sure to save a little extra that you can serve on the side later with the dish.

6. Season the chicken with salt, pepper, and a dash of paprika.

8. Spoon the sautéed mushrooms onto the bacon, being sure to coat each breast evenly.

9. Spread 1/4 cup of Monterey Jack cheese into each breast followed by 1/4 cup of Cheddar.

10. Bake the pan of prepared chicken breasts for 7 to 10 minutes or until the cheese is thoroughly melted and starting to bubble. I’ve also placed the chicken on the BBQ for days when I just don’t want to turn on the oven.

11. Sprinkle each chicken breast with 1/2 teaspoon parsley before serving. Put extra honey mustard marinade into a small bowl to serve on the side.

You can serve by itself with some French fries or add it on top of a toasted hamburger bun.
Slider Spice by Steven Raichlen:
http://www.amazon.com/gp/product/B003FZAVXS/ref=as_li_qf_sp_asin_il_tl?ie=UTF8&camp=1789&creative=9325&creativeASIN=B003FZAVXS&linkCode=as2&tag=barbecuebib06-20
Inspired by: Outback Steakhouse and Todd Wilbur “Top Secret Recipes:”
http://www.topsecretrecipes.com/Outback-Steakhouse-Alice-Springs-Chicken-Recipe.html?printable=Y