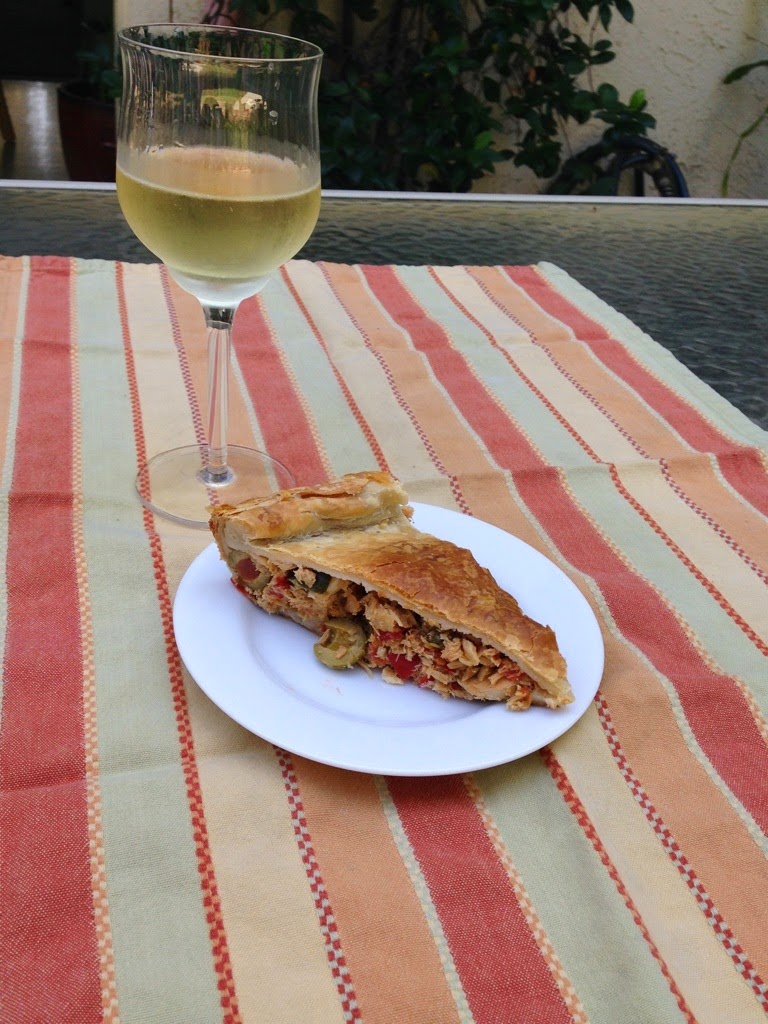 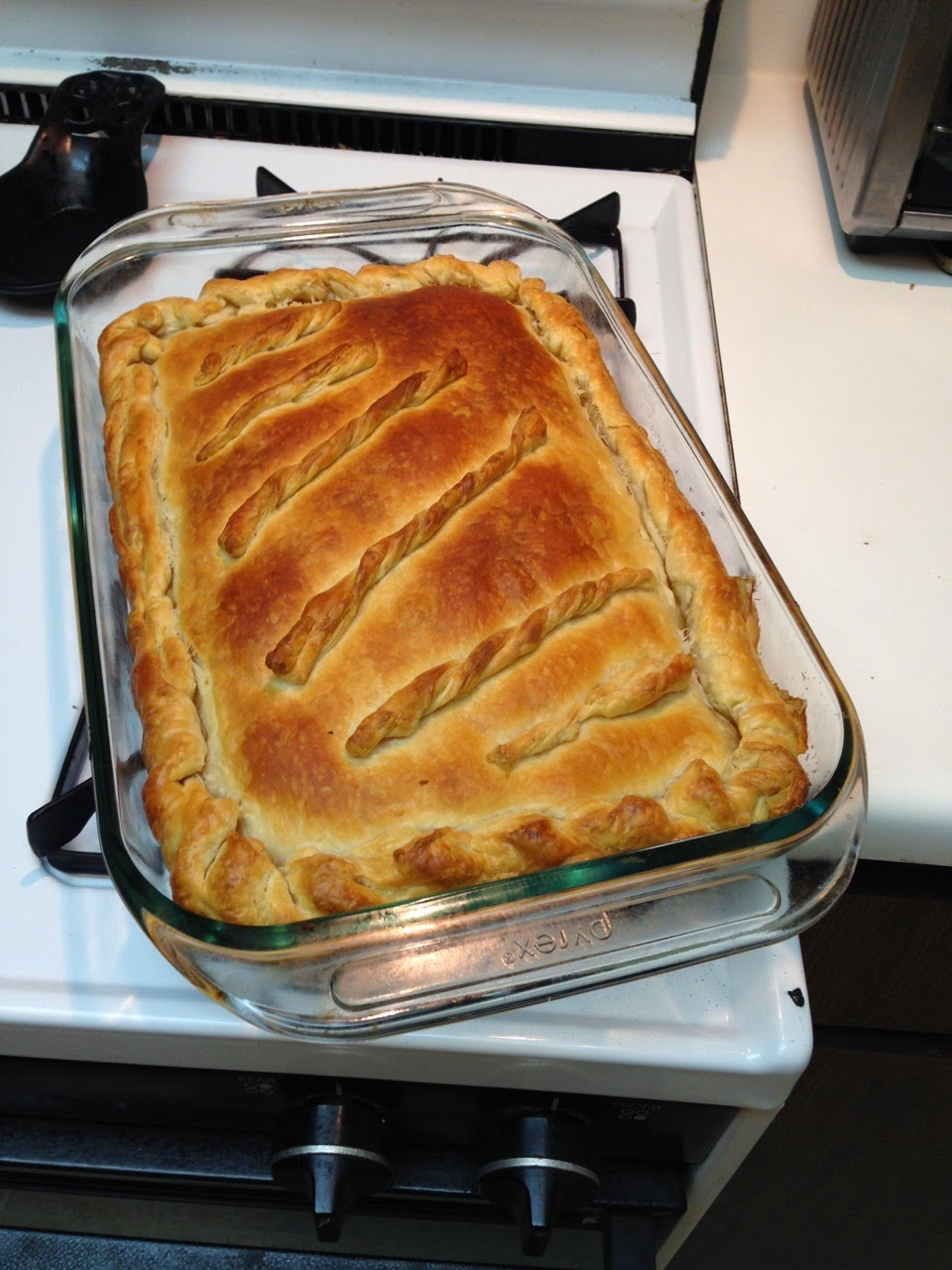 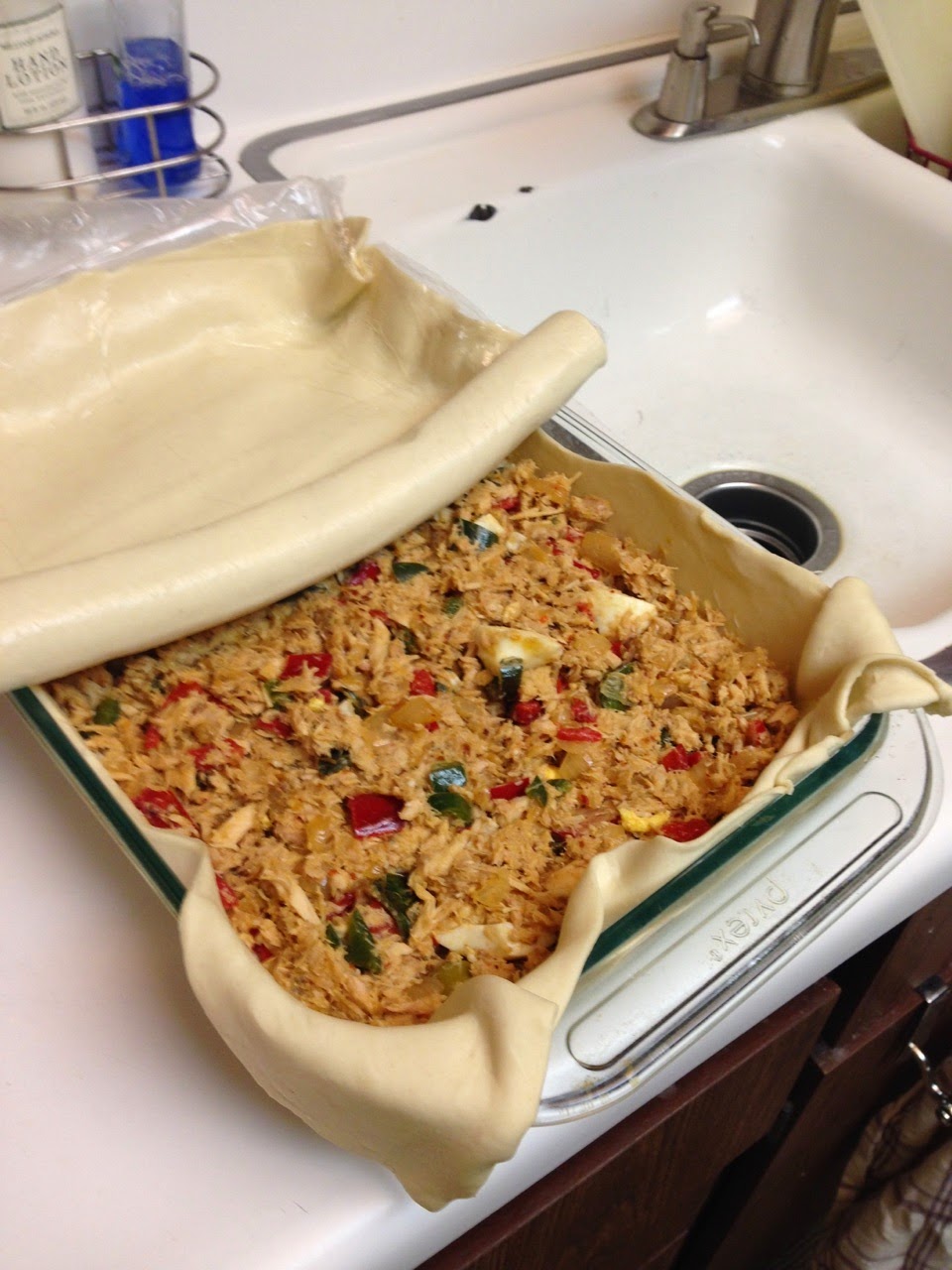 A handful of tweaks turn this comfort food into a smarter choice: white-meat chicken (not dark), extra veggies, low-fat milk in the filling, and a lighter crust. Brushing the phyllo with just a small amount of oil instead of butter makes it just as tasty.
Everyday Food, October 2007
·         Prep Time 40 minutes
·         Total Time 1 hour 10 minutes
·         Yield Serves 4-6
Ingredients

2 bone-in, skin-on chicken breast halves (12 to 14 ounces each) – You can also use an entire cooked Rotisserie Chicken (I used Costco for $4.99)

6 Phyllo / FILO sheets (each one is 12 by 17 inches), thawed – Find this in the frozen section = FILLO DOUGH
Directions:
1.     Preheat oven to 400 degrees. Place chicken on a rimmed baking sheet; season with salt and pepper. Roast until an instant-read thermometer inserted into thickest part of breast (avoiding bone) registers 165 degrees, 25 to 30 minutes. Let cool slightly; discard skin and bones. Shred meat, and set aside or use two forks and shred a whole rotisserie chicken. I didn’t use the dark meat and left some skin in it.
2.     Heat 2 tablespoons oil in a large saucepan over medium. Add carrots, onion, and thyme; season with salt and pepper, and cook until carrots are crisp-tender, 8 to 10 minutes. Add flour, and cook, stirring, 1 minute. Gradually add milk, stirring until smooth. Cook, stirring occasionally, until mixture comes to a simmer and thickens.
3.     Remove from heat; stir in peas, lemon juice, and chicken, and season with salt and pepper. Pour filling into a 9-inch deep-dish pie plate or your favorite baking dish.
4.     Stack phyllo on a work surface. Using a paring knife, cut out an 11-inch circle from the stack; discard trimmings. You can also use a rectangular pan so you don’t have to cut the sheets. Just fold over what hangs over and lay them directly on the filling. Stack 2 circles on work surface, and brush gently with 1 teaspoon oil; repeat with remaining circles and oil. Place phyllo stack over filling, and press down about 1/2 inch from the edge so phyllo fits inside rim of pie plate.
5.     Bake until golden and bubbling, 25-30 minutes. Let potpie cool 15 minutes before serving.
6.     If you want the non-healthy version, try adding homemade mashed potatoes at the bottom of the pan, then the filling, and top with phyllo sheets or serve the mashed potatoes alongside.


Marta Mayorga Bergandi is a very dear friend of ours. My husband grew up with her children and they still remain friends until this day. Marta had seen my blog post on the lighter chicken pot pie and mentioned that when her children were kids she used to make a similar casserole but used white tuna instead of chicken. Thank you Marta for sharing your images and recipe with us. Here’s the break down on her famous Tuna Tart (Empanada Gallega), originated from Galicia, Spain.
Ingredients:
1/4 cup or more of white onions, diced
1 of each, red and green Bell peppers, diced and seeds removed
2 cans of Chicken of the Sea White Albacore tuna, drained and shredded
Hard boiled eggs, diced
Green olives, diced
Olive oil
Salt
Paprika
Homemade crust or purchase premade crust (dough) from the supermarket. Not the layered Phyllo dough (Filo)
Directions:
In a pan, sauté your diced onions and peppers with some olive oil until the onions and peppers are soft
Dice up your hard boiled eggs and green olives
Drain your two cans of tuna and shred
In a large bowl combine the peppers, tuna, eggs, and green olives
You can add additional olive oil if you would like
Season with salt and paprika to your desire
Use a casserole dish or pie pan and add your crust to the bottom of the pan, fill the pan with your filling and then top with additional dough.
Bake per the directions on the box or until the crust is browned the way you like it. Most likely bake at 400 for 30 minutes or so.
Don’t forget to enjoy with a lovely glass of vino!
http://neighborchicks.blogspot.com/2014/09/tuna-pot-pie-tart.html